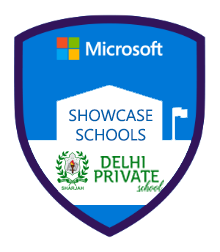 Khan Ayaan Abdullah, our Grade 12 student was awarded  Al Zarooni Award by His Excellency Suhail Mohammad Al Zarooni as an appreciation for his achievements in the year 2022. The Award aims at recognizing those who have performed exceptionally well and left their mark in their respective fields.

Khan has been participating in the Asteroid Search Campaign, an extension from NASA for their citizen scientist program. He has noted movements of three unknown asteroids and NASA has confirmed one of them in their preliminary detection list and has named it after him as KAA0003.

He also received the Sharjah Chamber Award from His Highness Sheikh Sultan bin Muhammad Al Qasimi (Crown Prince of Sharjah). He grabbed the rare opportunity to exhibit and perform live art at Expo 2020 Dubai, Indian Pavilion under the patronage of Dr Aman Puri (Council General of India in UAE). He has also hosted YOUTHS Creative Mind, an organization formed by him, on the occasion of World Environment Day and World Ocean Day involving founder of EEG and many more delegates.